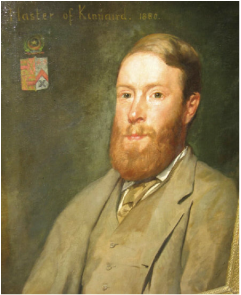 Arthur Kinnaird (later Lord Kinnaird, 1847-1923) was football’s first superstar.
Described as 'without exception, the best player of the day', he took part in nine FA Cup Finals (a record to this day), selected Scotland's first international team, and was President of the Football Association for 33 years.
He was such a dominant figure in the game that he was presented with the FA Cup in gratitude.
In his time and under his leadership, football rose from obscurity, played on muddy parks in front of a handful of spectators, to become Britain's national sport, with crowds of up to 100,000.
AF Kinnaird played an integral role as football swept the country like wildfire, thanks to the creation of easily-understood rules and crowd-pulling competitions.
Yet he was no mere footballer made good: a consummate philanthropist, he spent his youthful nights helping destitute orphans to read and write, devoted every waking hour to good causes, and earned a fortune in his career as a banker only to give much of it away.
As Lord Kinnaird, an ancient title he inherited in 1887, he led national bodies such as the YWCA and the YMCA, was Lord High Commissioner to the General Assembly of the Church of Scotland, and fostered the spread of evangelical religion.
His sporting accomplishments were widespread: he was a Cambridge University tennis blue, university fives and swimming champion, and took first place in an international canoe race. He won athletics prizes as a youth and played competitive cricket past his fiftieth birthday.
This was, however, no life of unburdened triumph: he lost two sons in the First World War, tragedies which eventually led to the demise of the Kinnaird title before the 20th century was out.

Read about his life: sports historian Andy Mitchell has published Arthur Kinnaird's biography, which is available to purchase through this website.