The men who made Scotland:
The definitive Who's Who of Scottish Football Internationalists 1872-1939 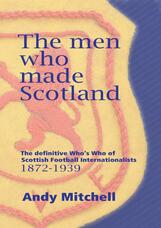 This book contains comprehensive biographies of every one of the 615 internationalists who represented Scotland between 1872 and 1939. It was a pioneering age, starting with a historic clash against England, a rivalry which became the pinnacle of British sport, progressing through the formation of the British Championship, the spread of professionalism, record-breaking crowds and the first foreign matches.

Every young Scottish footballer dreams of pulling on the dark blue jersey and you might think that every hero who has been capped will be revered in the annals of the game. Sadly, it isn’t true. For every Andrew Watson, Alec James and Hughie Gallacher there are internationalists who have been lost to the winds, whose stories are forgotten, whose very identities are barely known. Now, for the first time, that has been put right.

After many years of research, football historian Andy Mitchell has uncovered the stories of all the players.

​Historians will soon notice that many details differ to those previously published, and that is because the author has taken nothing for granted and has consulted original records wherever possible: from trawling the leather-bound Scottish FA player registers, to cross-checking birth, marriage and death certificates to ensure they matched.

As a result, the wealth of detail is as complete and as accurate as it is possible to be. The players who took part in these contests are key to our football history. This book is a lasting tribute to their achievements: the men who made Scotland.

To buy direct from the author at the same price as Amazon (post free in the UK), send me a message on the contact form. I accept PayPal or bank transfer, and can sign it for you if you wish.