Rossie Priory - in its day, one of the finest homes in Scotland 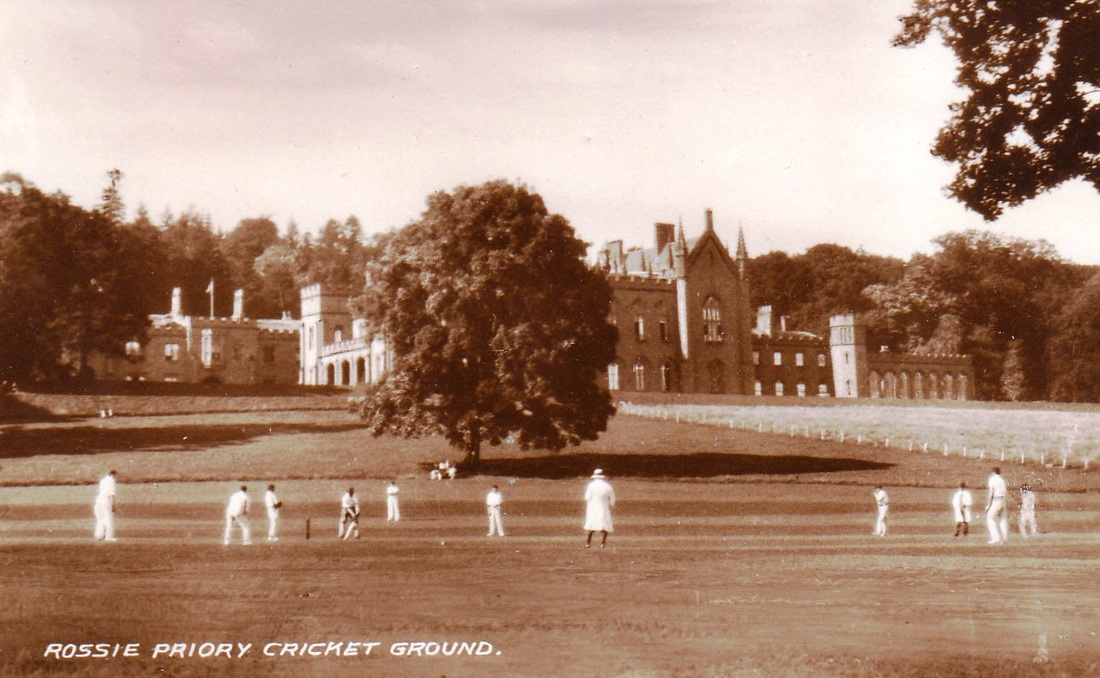 When Charles, 8th Lord Kinnaird, inherited the title in he commissioned the architect William Atkinson to build a house in Regency Gothic style, on such a vast scale that it took five years to build. Charles had five children, and the first to see the light of day in the new Rossie Priory was his youngest son Arthur, the father of the subject of this website, who was born there in July 1814.
Rossie Estate, just north of Inchture village, was – and still is – a splendid piece of prime agricultural land, although rather isolated. The main road passing the estate had a turnpike until at least 1836, and the Perth-Dundee railway did not open until 1847 (with a special branch line constructed to the gates of the estate).
One prominent visitor, the Earl of Shaftesbury, described Rossie Priory in 1839: 'This is an excellent house; large, comfortable, and handsome, full of articles of wealth and taste, pictures, statues and china, infinite in extent and value. The place is gentlemanlike, and highly agreeable, commanding fine views of the country and the course of the river Tay.'  In 1885 the Ordnance Survey Gazetteer of Scotland praised Rossie Priory as ‘a superb monastic-looking pile, spacious and elegant within, and of imposing aspect without; contains a valuable collection of antiquities, chiefly Roman; and has pleasure grounds, gardens and policies of great extent and singular beauty.'
When Arthur Kinnaird became the 11th Lord Kinnaird, he inherited Rossie Priory in 1887 along with the title, but it was effectively reduced to the status of a holiday home. Arthur and his wife Alma generally visited Rossie only for two or three months in the summer, preferring to remain in London most of the year.
Arthur was not a natural country type but he did enjoy the shooting season, and a typical year's game shooting can be ascertained from the records for 1911/12 in the family archive. The estate accounted for 8,383 birds and animals, with most of the bag comprising over 5,000 rabbits and hares, while there were 698 partridges, 1215 pheasants and small numbers of woodcock, wild duck, grouse, snipe, capercailzie and six roe deer.
After Arthur's death, Rossie Priory became impractical to manage and prohibitively expensive to maintain, and after the Second World War much of it had fallen into disrepair.  In 1948, the greater part of the mansion, which had been suffering from widespread dry rot, was pulled down and the art collection, statues and some fine paintings were sold at Sotheby's. Only the west wing was spared and it is still a handsome red stone building. The steps to the old entrance remain, and the foundations of the grand old house can still be clearly seen.
Today, the 2,000 acres of parkland and agricultural land make for a wonderful location and, although private, there are walkways through the grounds which can be followed. Immediately to the south of the house is the cricket pitch, one of the oldest in Scotland and still in regular use by Rossie Priory Cricket Club.