England v Scotland in 1870: the origin of international football 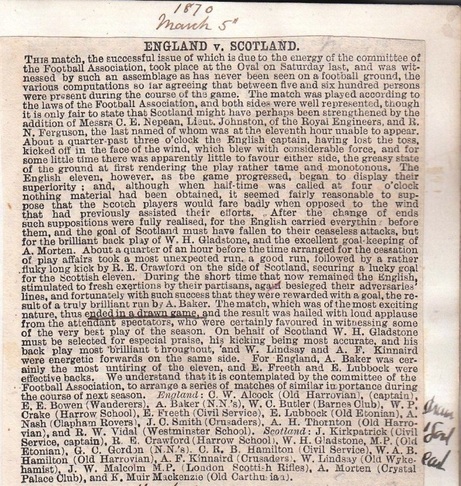 This match report from 1870 was preserved in Arthur Kinnaird's cuttings book
The world's first football international, England v Scotland, was played in London on 5 March 1870.
You won't find the match in the official records, as it was organised by the Football Association without any input from Scotland - the 'visiting' team comprised solely players with Scottish roots living in London.
There were five such 'unofficial' contests over the next couple of years before the fixture was established on a more conventional basis, the first of the accepted internationals being held in Glasgow on 30 November 1872.
Arthur Kinnaird played a key role in the match and can claim to be Scotland's first ever team manager: with his Scottish heritage, he and civil servant James Kirkpatrick were given the task of selecting the players to face England.
The first public announcement of the game was an advert buried in the pages of the Field newspaper on 22 January 1870:

From the Secretary of the Football Association. A match between the leading representatives of the Scotch and English sections will be played at The Oval on Saturday the 19th February next, under the auspices of the Association.  Players duly qualified and desirous of assisting either party must communicate with Mr AF Kinnaird of 2 Pall Mall East, SW or Mr J Kirkpatrick, Admiralty, Somerset House, WC on behalf of the Scotch, or with Mr Charles W Alcock, Boy Court, Ludgate Hill, EC or Mr RG Graham, 7 Finch Lane, EC on the part of the English.

The appeal brought a flurry of responses from Scots eager to take part, giving Arthur Kinnaird and James Kirkpatrick a strong team. When a severe frost in London (the upper reaches of the Thames froze over) forced a postponement of a couple of weeks, two of the original selection had to drop out because of prior appointments and this is how the teams lined up at Kennington Oval that cold and windy March afternoon:

On a ground that was slippery because of recent rain, the teams were well matched and after 45 minutes there was no score. The sides then changed ends, an innovation to the rules which had only been agreed the previous months.
The match turned on a disastrous tactical decision by Charles Alcock to move his goalkeeper upfield in support of the forwards. Robert Crawford, a 17-year-old schoolboy at Harrow, took advantage of this absence and his shot from distance (also described as a 'lucky long kick') found the empty goal to give Scotland the lead with just 15 minutes left.
The sides changed ends again, and as England tried with increasing desperation to get back on level terms, the Scots held firm until the final minute when Alfred Baker, 'by one of the finest runs that have ever been witnessed', dribbled his way through the Scots defence to shoot home the equaliser.  Thus the world's first football international ended in a 1-1 draw.
Over the years, there have been accusations that some of the Scotland players were selected for tenuous reasons, such as having a shooting estate in the Highlands or a fondness for whisky, but my research shows that all of them - with the possible exception of one late replacement - had genuine Scottish heritage. They would all have qualified for Scotland under modern regulations, which allow for eligibility based on birth back to grandparent level.
The full story is revealed in my book First Elevens: the birth of international football which is on sale at £9.99 - just click on the link for full details. The book has full biographies of all the players in this game and all the pioneering internationalists, but here is a quick summary of their Scottish roots:

James Kirkpatrick: born in Ontario, Canada, his parents were born in Dumfriesshire.
Arthur Kinnaird: born in Hyde Park Gardens, London, his father was born in Rossie Priory, Perthshire.
William Gladstone MP (son of the Prime Minister): born in Hawarden Castle, Wales; both his paternal grandparents were born in Scotland, in Leith and Dingwall.
Robert Crawford: born in Elizabeth Castle, Jersey, where his soldier father was stationed; his Scottish mother was christened in Dunbar, East Lothian (although born in Jamaica, again on a military posting), and both her parents were born in Scotland.
Charles Baillie-Hamilton: born in Greenwich, Kent, his paternal grandfather was born in Mellerstain, Berwickshire; and his maternal grandmother was born in Dumfriesshire.
His brother William Baillie-Hamilton: born in Brighton, Sussex, had the same lineage.
William Lindsay: born in Benares, India, his soldier father was born in Dundee.
Wingfield Malcolm MP: born in London, his father was born in Poltalloch, Argyllshire.
Kenneth Muir Mackenzie: born in Delvine, Perthshire.
George Gordon: born in Kensington, London, his paternal grandfather was born near Tomintoul, Banffshire.
Alexander Morten: born in Paddington, London. Morten, the goalkeeper, was a late replacement for the original selection, Robert Ferguson, and as his background remains shrouded in mystery it has not been possible to establish any Scottish links; he did act as Scotland's umpire in the next unofficial international, but played for England against Scotland in 1873.

For the English, Thornton and Crake were born in India, while Bowen was born in Ireland.  Truly a cosmopolitan mix of the Empire!

Arthur Kinnaird also selected and played for the Scotland team for the two subsequent internationals in the 1870-71 season, and the match report pictured above comes from his personal cuttings book, in which he kept a record of all the games he played in the early part of his career.  He missed the 1871-72 season as he was on a tour of India, then in 1872-73 he returned to action, not only winning the FA Cup with Wanderers, but also gaining his 'full' international cap for Scotland in March 1873.
He was in such good form that the Football Annual described him as: ‘Without exception the best player of the day; capable of taking any place in the field; is very fast and never loses sight of the ball. An excellent captain.'