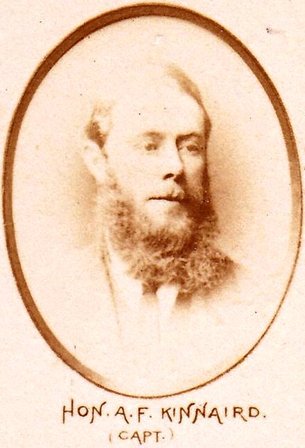 Arthur Kinnaird, victorious captain of Old Etonians in 1879
The esteem in which Arthur Kinnaird was held in the footballing world can be measured by the decision in 1911 to present him with the nation’s most iconic sporting trophy: the FA Cup.
Kinnaird played in nine FA Cup finals, a record to this day, and won the trophy in his very first cup-tie, captaining Wanderers to victory in 1873. He lifted it again with Wanderers in 1877 and 1878 and then, with Old Etonians, he captained two more cup-winning teams in 1879 and 1882. His record of five victories was not broken until 2010. He also played on the losing side in the finals of 1875, 1876, 1881 and 1883.
The original 'tin pot' trophy remained in service until September 1895, when it was stolen from a shop window display in Birmingham. The FA commissioned a replica, made by Vaughtons from a cast of the original, and this was presented at the finals from 1896 until 1910. Around that time, the FA discovered that the trophy had been copied commercially, and resolved to replace it. Fattorini & Sons of Bradford created a new trophy at a cost of £57 and 13 shillings, and this design remains in use today.
The FA had to decide what to do with the old trophy and agreed that it would make a fitting gift for their President. On 6 February 1911 the FA held a dinner in honour of Lord Kinnaird and Charles Clegg (FA Chairman) at the Holborn Restaurant in London,organised by a dinner committee of six Council members: Charles Crump, William Heard, Henry Huband, Herbert Porter, James Buteux Skeggs, and FA Secretary Frederick Wall.
Among the 71 (all male) guests were three of Lord Kinnaird’s sons, Douglas, Kenneth and Arthur (youngest son Patrick, at 12 years old, was too young for such an event). Douglas Kinnaird’s personal copy of the menu is now on display at the Scottish Football Museum along with the table plan, which reveals a top table of 17 overseeing a further 54 guests comprising the great and the good of English football.
The evening was a lavish gastronomic affair with dishes including pot au feu, boiled turbot, devilled whitebait, chicken sauté Windsor, fillets of beef piqué Richelieu, roast pheasant and mayonnaise of lobster, followed by a choice of desserts. The drinks started with an 1886 Montilla very dry sherry, followed by Rudesheimer 1906 (white), Pommard 1904 (red), 1898 Irroy Carte d’Or Extra Sec champagne, and a 35-year-old Courvoisier brandy.
Then, the eating over, came the presentations. The cup had been specially prepared for the presentation with two silver shields attached to the plinth, one of which read: 'Presented by The Football Association To The Right Hon Lord Kinnaird in appreciation of long and very valuable services rendered to the game, 6th February 1911'; the other was inscribed 'The Right Hon Lord Kinnaird. International 1873. Final Cup Competition, 1873. 7. 8. 9 & 1882. Member of Council since 1868. President Of The Football Association Since 1890'.
Next, Charles Clegg was presented with an elaborate album of photos of his colleagues, in acknowledgement of his services as chairman of Council for 20 years. The illuminated address which prefaced the album paid tribute to his 'sturdy independence of character, exceptional judgement and knowledge'.
The cup went home with Arthur to go in display in his house at St James’s Square, and remained in the family for many years. Although initially kept on show, latterly it was held in a bank vault, and only resurfaced to the public gaze in 2005, the star lot in an auction of football memorabilia at Christie's auctioneers in London.
After fierce bidding it was acquired by the millionaire David Gold, at that time chairman of Birmingham City (he is now owner of West Ham United). He paid £478,400 for Lord Kinnaird's FA Cup, and promptly gave it to the National Football Museum on long term loan. 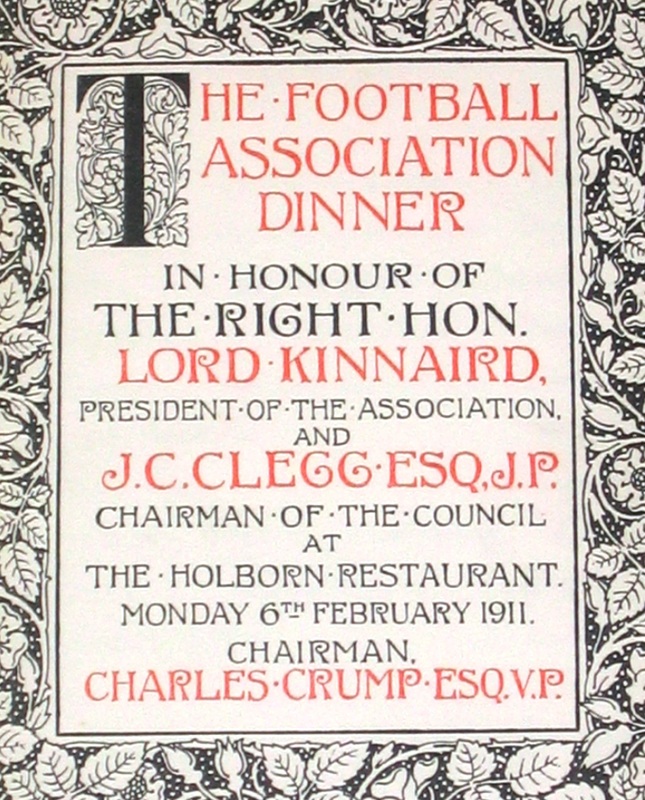