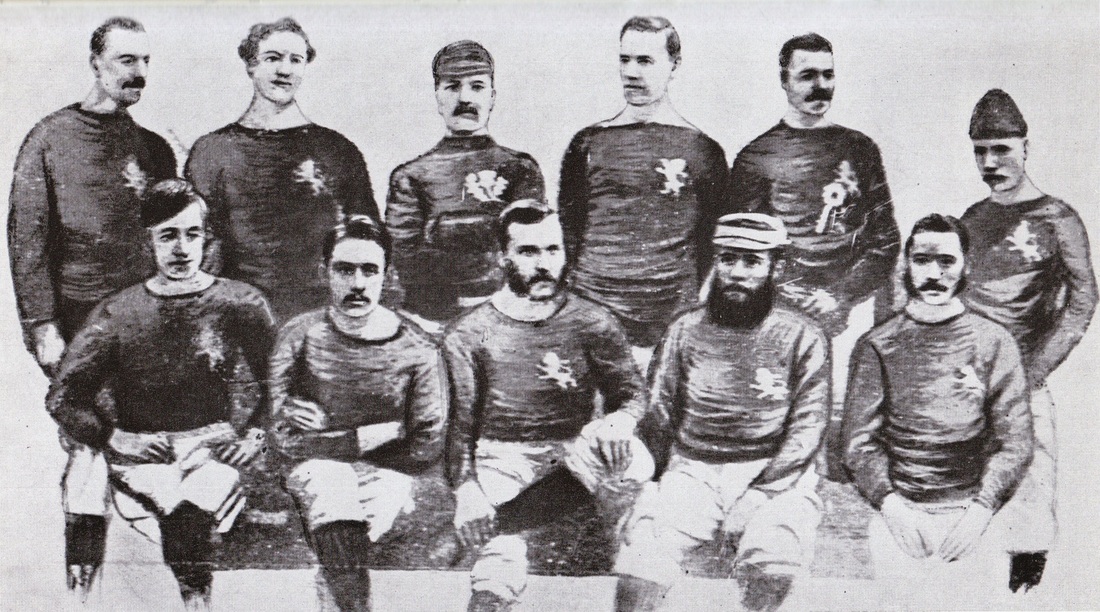 Scotland 1873. Back: William Gibb, Robert Smith, Henry Renny-Tailyour, James Thomson, William Ker, William Mackinnon. Front: David Wotherspoon, John Blackburn, Robert Gardner (captain), Arthur Kinnaird and Joseph Taylor.
Scotland's match against England in London on 8 March 1873 was the second genuine international, following the outstanding success of the inaugural game in Glasgow the previous November.
As the Scottish FA had not yet been formed, the Scotland side was again selected by Queen's Park FC. Robert Gardner retained the captaincy, and he was joined on the train south by team-mates JJ Thomson, William Ker, William Mackinnon, David Wotherspoon, Joseph Taylor, as well as Clydesdale's William Gibb, and Archibald Rae as umpire.
However, although Queen's Park had made a healthy profit out of the first international, they only had sufficient money to send seven players and an umpire to London. They needed four locally-based recruits to make up the team.
An obvious choice was Robert Smith, a Queen's Park founding member who had moved to London and was now playing for South Norwood; he had played in the November game. Two more, John Edward Blackburn and Henry Waugh Renny-Tailyour, were with the Royal Engineers at Chatham. The last was Arthur Kinnaird, featuring regularly for Wanderers, and the driving force behind the early unofficial internationals of 1870-71. It would be his only full international cap for Scotland.
The grainy photo (above) of the Scotland team is the oldest known such picture. If the English were also photographed, the image has never surfaced. One intriguing aspect is that it shows Kinnaird with beard, cap and half-length trousers: there is a common misconception that he always wore long white flannels, but here he is in knee-length knickerbockers.  Another curiosity is the thistle badge on Renny-Tailyour's shirt - a souvenir of him playing rugby for Scotland the previous year - rather than the lion rampant awarded to the others.
Around 3,000 spectators at Kennington Oval produced receipts of £106 and one shilling, which equates to 2,121 paid admissions at a shilling each, with ladies and some guests admitted free. The FA was left with a handsome profit of £73 8s 6d - not bad considering their total annual income in the late 1860s was around four pounds!
Having lined up in Glasgow with eight forwards, a half-back, a back and a goalkeeper, the English adopted the more pragmatic Scottish formation of six forwards, two half-backs and two backs.
England raced into a two goal lead, thanks to Captain William Kenyon-Slaney’s shot in the opening minute and a second from Alexander Bonsor which was deflected past the visiting goalkeeper, Robert Gardner. It looked at that stage as if Scotland were going to be outclassed but the visitors rallied and by the time twenty minutes were on the clock they had drawn level. First, Henry Renny-Tailyour scored to finish off a brilliant dribble by Arthur Kinnaird, then William Gibb got the equaliser.
The revival did not last, and England deservedly went ahead as Kenyon-Slaney again scored with a left-foot shot. Although Gardner kept the English at bay with a succession of fine saves he could do nothing to prevent goal number four from Charles Chenery. England won 4-2 but it would prove a rare triumph: Scotland lost just once to England in the next 15 years.
Three weeks later, Arthur Kinnaird won the first of his five FA Cups with Wanderers, captaining them to success over Oxford University, but although he would feature regularly in cup finals for another decade, he would never play for Scotland again. That was because the Scottish Football Association, formed the following week, adopted a policy of only selecting Scots-based players until the mid 1890s.
The match card, illustrated below, is the oldest known football programme in existence and remains in the family of England captain Alexander Morten. Although overprinted with the match result and scorers, it is clearly based on a pre-match card to help the spectators identify the players by their headgear and stockings. This is how the teams were listed: 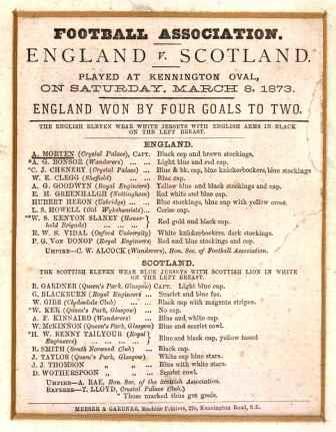